New on Lyrikline: English translations of six poems by Jeroen Theunissen, former editor of Yang, the predecessor of nY. 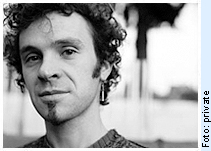 Jeroen Theunissen was born in 1977 in Ghent. He studied language and literature and, in addition to his activities as a writer, he teaches English, German and Dutch.

Theunissen has published two volumes of poetry: Thuisverlangen (2005) and Het zit zo (2009) in which he deals with the language of marketing, mass media and ideology of the free market, which has invaded all spheres of everyday life. Globalisation criticism, rebellion, nonconformity, green movement: everything has become a lifestyle to which we have access at any time, by saying the right, set phrases or by buying the right products. Commitment has become an option, which is determined by the market.

In his poems, Theunissen searches for a commitment that is not encapsulated in a neoliberal ratio. He manipulates language in a special way. Ungrammatical sentences and words that disrupt the usual order oppose the language of managers and marketing specialists and remind us of the possibilities and the power language actually has. These wild, “inappropriate” speech pieces are peepholes in reality itself, in a language that is not corrupted by the neo-capitalist discourse and is again congruent with itself.

The true commitment of the poet, says Jeroen Theunissen, is to write poems that elude from the “world of laissez-faire and of neo-capitalism”, poetry that is not incorporated by the neo-capitalist order but is a free space for language.