English translation of Flemish poet Geert Buelens‘ poem “(i.m. dfw)”
published in the last issue of the literary journal yang (2008, #4)
as part of a tribute to David Foster Wallace

in a cunning pan slipping up

what if and whether and

when your mind unfolds

come on now, you can’t possibly

this is how you’re wired

is your default setting

not everything is a language game

but not everything is green

as if it just came to be 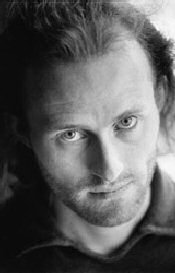 Geert Buelens (Belgium, 1971) is a poet and Professor of Modern Dutch Literature at the University of Utrecht. In 2001 he attracted a lot of media attention with a book on the Flemish avant-garde poet Paul van Ostaijen and his influence on twentieth-century poetry in Flanders. This study was awarded the prestigious triennial Flemish Culture Prize for Essays in 2003, and has been widely acknowledged as the reference work on the experimental tradition in twentieth-century Flemish poetry.

In 2002, Buelens published his first collection of poems: Het is (‘It is’), which was awarded the Lucy B. en C.W. van der Hoogt-prize. In 2005, Buelens published his second collection of poems, Verzeker u (‘Ensure’). In 2008 he published Europa, Europa, an essay book about the effect of the First World War on modern poetry, in which he tries to contextualise the poetics of great European poets such as Rilke, Pessoa, Mayakovsky and Apollinaire.

Buelens has an extraordinary ear for rhythm and sound and is strongly influenced by twentieth-century American poetry. As a former editor of the literary magazine yang he translated American poets such as Bruce Andrews, Michael Palmer and Louis Zukofsky and edited a special issue of yang on LANGUAGE-poetry. At first sight his poetry appears to be difficult, and while it can hardly be called simple, it is never uncomprehensible. Rather, it links the quest for the appropriate linguistic structure with the everyday struggle of the lyrical protagonist.