Poet, visual artist, and composer Anne Tardos originally wrote this piece in English as a contribution for an issue of the Flemish literary magazine nY on inter- and polylinguistic writing (2011, nY #9), where it was published in a Dutch translation by Samuel Vriezen.

“Khe,” an inner sound, the one you wake up with in the morning, the sound of the truth. What language is that? Is it a language? Does it mean anything? Yes, it seems that all sounds have meaning. In this case, “Khe” means “Here I am, I exist, I’m awake, I’m in the world: Khe!”

Being of French, Hungarian, and Austrian descent, and having learned English at age 21, these four languages finally made up one whole: My singular, personal language. Never having had the opportunity to attach myself to any of these languages, having been born in France toward the end of World War II, I moved from culture to culture, language to language. Now I find myself speaking with a slight accent in each. My voice has a noticeably different tone, timbre, and pitch, depending on which language I speak. Depending on the language, I might even think differently, make different decisions.

Because of this collection of languages spoken during my life, I discovered ways to conglomerate them by allowing words and phrases to cross boundaries, breaking down the barriers of the established tongue. A linguistic liberation; a democratization.

As I spend more and more years living in anglophilic New York, I find that my multilingual writing changes and drifts more toward English, while remaining in a multilingual “mode.” More neologisms enter, and even in my pure English texts, I’m freer to invent a new, personal syntax, which is rooted in my initial inclusion of other languages.

One of my multilingually written texts from the late 1980s is “Ami Minden,” incorporating French, Hungarian, German, and English; freely moving from one sound and meaning to another. “Ami Minden” was first published in my book Cat Licked the Garlic, later realized as a computer-animated text for the Museum of Modern Art’s exhibit “Between Word and Image,” and in 2010, made into a letterpress broadside by Annis Press at Wellesley College.

I wrote this, as I often write, in a quasi-liminal state of mind. I continued writing this way, exploring the true language that lived inside my linguistically unattached mind. I superimposed the text, as I have done with other poems, over digitized video images, to create performance scores by the interaction of text and image. 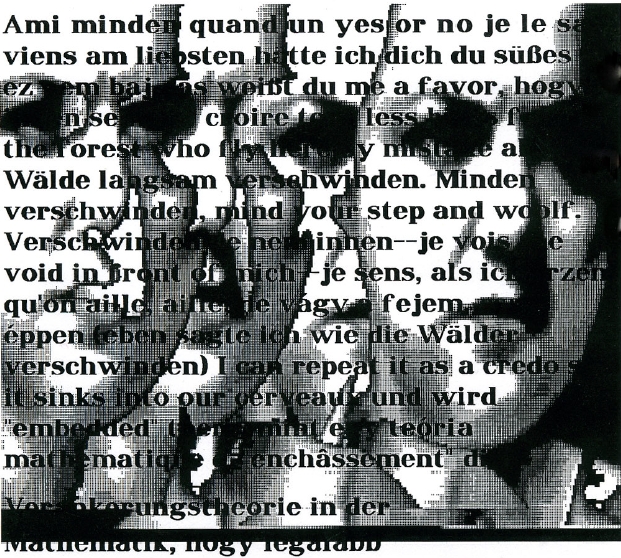 Elsewhere in Cat Licked the Garlic, I’m being more explicit about the language itself:

I continued on this path well into the 1990s. In my book, Mayg-shem Fish, I provide non-English words or phrases with meticulous footnotes, as in the first three lines of the poem “Cage at Carnegie:”

Using footnotes, I offer pronunciation and meaning, trying to avoid what might seem obscure and opaque, even though I believe that partial comprehension is like life itself; not everything is understood.

﻿﻿Footnotes to poems tend to distract from the form, so in my next book, Uxudo, I devoted the left-hand pages to translations and transliterations of the poems appearing on the right, thus freeing me from numbered footnotes. In Uxudo, phonetic transcriptions are geared to the English, as well as the German, French, and Hungarian reader, without identifying a language. With a line such as “Durchschnittlich windy—je ne me le plastic wrap” I would only translate the word “durchschnittlich” and leave the “je ne me le plastic wrap” alone. The idea is not to provide a dictionary, but to create a new poem that shadows and reflects the original. Neologisms are translated as themselves: “efnogla = efnogla = efnogla,” saying that it’s the same in any language.

I often let neologisms parade as, or approximate, a particular language, as in “multiplicatering delta veinard” or “killermeeny ha ma na la wonkaugh.”

The poem “Toowomba 8,” has echoes of German and French and possibly Russian:

In I Am You, a book I wrote after the death of my husband and artistic collaborator Jackson Mac Low, I was concerned with transformative emotions and philosophy. Neologistic elements are fairly rare in this book. Still, the long poem “Letting Go,” begins with:

In my current series, NINE (nine-word lines, and nine-line stanzas), neologisms although rare, still appear throughout.

The last three lines of NINE, 16 are:

In NINE, 28, only the last line becomes neologistic:

﻿Wiki Mandolin stole his happiness from an indifferent universe.
Determinism is not the enemy but the relentless ego.
Follie a deux figurine, funny little dinky ink blob.
I’m only good when I’m good for nothing.
The gym makes me feel like I’m a member.
You say that the perfect act has no results.
If I can understand it, anyone can understand it.
Those FedEx guys lost their cool completely that day.
Ziglio lusty mannequin gooey saliva shiva tzim-tzim tchebaba.

When Samuel Vriezen asked me to contribute to this issue of nY, dealing with inter- and polylinguistic writing, I wrote NINE, 57 for the occasion—not worrying about multilinguality, but letting thoughts and sounds flow freely within the established restrictions of word- and line-count: